Hey there everyone! I got transferred again! I’m in a town called Gila Bend. 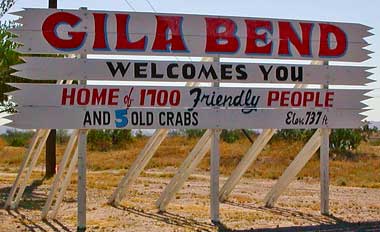 Despite how small the town is we have the biggest area in the mission. This town is so awesome, I’ve wanted to serve here for awhile now so I’m super stoked! I’m going to try and explain this town, so bear with me a second.

Picture basically every back end, no name town where supernatural takes place, that’s this town. The main road is more or less part of the intestate system, there’s two grocery stores here, a dollar general and a family dollar, so on P-day we get a ride up to Maricopa (which is about a forty minute drive) and go shopping at Walmart.

A solid 30% of the buildings have tin roofs, and another 10% are utterly abandoned. Trains run through this town at least thrice hourly, and the only restaurants are Burger King, a super overpriced diner, McDonald’s, and pizza from Circle K (we eat at the last two at least once a week each).

Everyone knows everybody else and all of their secrets, so everyone knows and has probably talked with, the missionaries before.

The branch has about 60 members, of those only about 20 show up. So they call and assign members from Maricopa to attend this ward. Due to this, the ward is bilingual, sacrament is in English and the translation department is… the missionaries! My Spanish is going to be forced to get better here.

Also there’s only two hours to church, sacrament and Priesthood/Relief Society (they’re combined together and meet in the chapel). Due to this sheer lack of members we rarely, if ever, get fed. So we receive an extra twenty dollars a month for food.

I’m also in a trio again, fourth time in the mission. My companions are pretty cool too:

We also cover a Native American reservation which we go out to at least once a week. We have to walk there though because if we bike, all the dogs will get riled up and attack us. Walking is fine for some reason though. This is also the most likely spot for us to be circled by a bunch of vultures, which has happened before.

I’ve also been told by a couple of members and investigators that when I speak Spanish I sound like an Argentinean or a Spaniard. I guess that’s better than gringo, but I still need to work to develop a Mexican accent.

That’s all I have for this week, love you all!